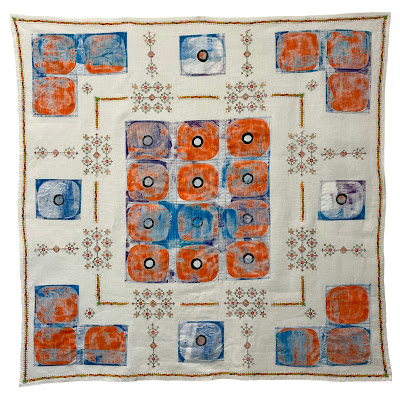 New work in my Loss series. My husband and I celebrated our 40th wedding anniversary in June 2022. I am extremely happy and proud that he has been my partner and best friend for 47 years and counting.

When we first started seeing each other in our late teens, my mother did not approve of my relationship with my then boyfriend. Thankfully she did over time.

Before my father died (I was 18 and he was 43) he told me he hoped I would marry someone Jewish, which I did. My father was Orthodox. My husband and I are Jewish but not religious. Had my father lived, I think he would have liked my husband.

40th Wedding Anniversary is mixed media on fabric and measures 32" x 32". The monoprinted and painted construction fence pattern is machine appliquéd on an embroidery I purchased on eBay.

I am very interested in working with the different grid patterns of construction fences. My artwork is a combination of printmaking, painting, collage, and sometimes stitching. (AKA Jeanne Williamson)

This blog does not accept comments. Do you have a comment, a question or want to say hello? Send me an email.

© 2007-2022 Jeanne Williamson Ostroff. All rights reserved. Unless noted, all artwork, photos and text are copyrighted by the artist. Images may not be reproduced, manipulated or used in any way without Jeanne's written permission.