Staying Cool with the Arts and Making Connections

The past weekend was about looking at art, making connections and keeping cool.

As the temperature hit 103F outside of Boston on Friday afternoon, I was watching Midnight in Paris, Woody Allen's new movie, which I really enjoyed. Part of the storyline included the main character's spending some time with Henri de Toulouse-Lautrec, Paul Gauguin, Edgar Degas, Salvador Dalí and Pablo Picasso to name a few artists.

On Saturday, I went with a friend to an even hotter New York City, to spend the day at the air conditioned Metropolitan Museum of Art so we could see Alexander McQueen: Savage Beauty, which is on exhibit through August 7th.

Alexander McQueen was a brilliant fashion designer/artist who died in February 2010. I loved the range of clothing in the show, the textures, the art, the patterns, and the performance. So was the history and the stories behind the different collections. 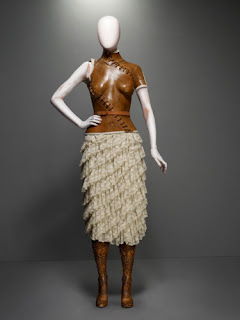 Photo and text from the Met Museum's website. A bigger copy of the image can be seen here.

The image above was one of my favorites pieces in the show, not only because of the form fitted leather bodice, which is very sculptural. I also loved the carved prosthetic legs that McQueen made for Aimee Mullins, who is a world-class Paralympic athlete. Seeing them was especially of interest to me because I heard Mullins on The Moth Radio Hour on NPR while I was at my art residency at the Vermont Studio Center in May. Her story was intelligent and funny and sad and inspiring and more.

I highly suggest seeing the show before it closes, but be warned about the long wait in lines to get in the museum, and the longer line to get in to the McQueen show, and the crowds once inside the show. We purchased advance tickets to get inside the Museum, so that was one less line to stand in.

A friend who had already seen the McQueen show suggested that we rent the audio tape so we could hear the personal testimonials from his design staff, Sarah Jessica Parker, Naomi Campbell and etc. I really got a lot out of listening to the audio. It was helpful that we didn't have to read the info written on the walls, which was where most of the bottlenecks were in the galleries. I've never rented an the audio tape before at a museum. It was great and well worth it.

We also saw the Richard Serra's Drawing Retrospective, which is open through August 28th. I am familiar with his sculpture but I didn't know anything about his drawings, so his show was an education for me. I loved how his drawings were so similar to his sculptures, and the way they were exhibited gave them their own sculptural feel.

Later in the day, while wondering around many galleries, looking at paintings and sculptures, I kept thinking about Midnight in Paris, as I saw the work of Picasso, Toulouse-Lautrec, Gaugin, Degas, Dali and many others.

I am very interested in working with the different grid patterns of construction fences. My artwork is a combination of printmaking, painting, collage, and sometimes stitching. (AKA Jeanne Williamson)

This blog does not accept comments. Do you have a comment, a question or want to say hello? Send me an email.

© 2007-2022 Jeanne Williamson Ostroff. All rights reserved. Unless noted, all artwork, photos and text are copyrighted by the artist. Images may not be reproduced, manipulated or used in any way without Jeanne's written permission.